135 hungarians supporters came to Bucharest plus some sponsors and staff probable less than 200 persons...
http://www.handbalvolei.ro/se-apropie-z ... mai-facem/

Not very much I would say...
Top

...and CSM Bucharest will probably have 0 in Gyor. so what is your point here?
Live long and prosper.
Top

swarthofole wrote:...and CSM Bucharest will probably have 0 in Gyor. so what is your point here?

I expected to be 400 - 500 hungarians supporters in Bucharest....Gyor is big handball club....and without supporters from guest -team looks like an anonimous match though....
Top

i tend to agree with this one. imho the thuringen, ftc, vardar wins are unquestionable, the other three seems a bit messy at first sight, but i am the same opinion. ceseme bux (

) has a big chance to catch eto. amorim is out, i think oftedal going to skip this too, and the tomori-am hansen-knedlikova trio are so fresh so clean for this one yet. and csm has the deepest roster in this business anyway.
Top

Doru Delavale wrote:135 hungarians supporters came to Bucharest plus some sponsors and staff probable less than 200 persons...
Not very much I would say... 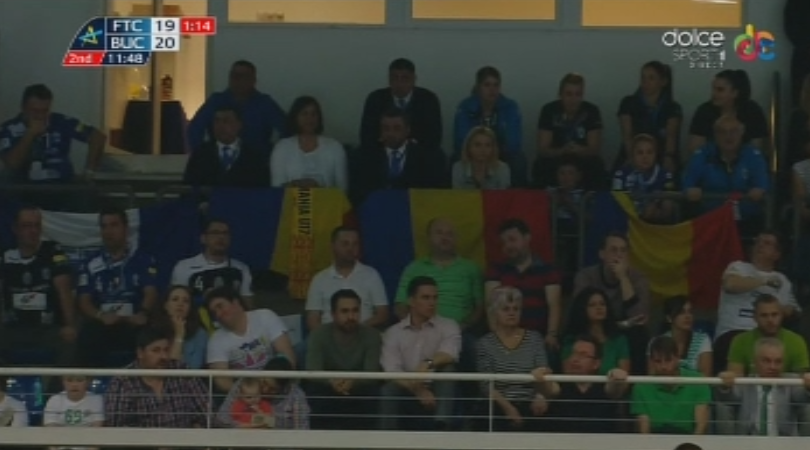 swarthofole wrote:...and CSM Bucharest will probably have 0 in Gyor. so what is your point here?

I expected to be 400 - 500 hungarians supporters in Bucharest....Gyor is big handball club....and without supporters from guest -team looks like an anonimous match though....

Well, it’s a group match, not the game of the year for ETO.
Top

Not very much I would say...

I guess the current injury situation at the team indicates that they won't take this match so seriously.
Enough to beat CSM at home or in the F4.
Amorim and Althaus out, Tomori, Groot and Hansen only on their way back, Oftedal questionable.
Top

Digisport 1 began live transmision from 19.30 (Ro Time) with some interviews (Radu Voina,C.Buceschi,A.Vasile,B.Vasiliu ...) also (Amorim,Mork,Groot). Mork was very cautious in declarations but the dutch girl think that CSM haven't a teamplay yet and Gyor can profit on this ....
Top

Neagu returned to play for a Romanian team and to beat some Hungarians!

For Gyor only Groot is really good. Can ETO beat CSM Bucharest and Vardar/Rostov? Even in Budapest it will be hard. You can't lift the trophy with only 2 world class players and in rest expired or reboots. Although I expect the return of Amorim to see where she stands.

Bookies were so wrong. People ran with their money !
Top

One of the best phases ever, aeriana Neagu for Majda! CSM has the best wings, Mehmedovic and Hagman is as good as Martin. Awesome backs, defenders and pivots. Only Wester to join us!

Swart, hahaha, funny guy! I thought you cheer up for Slovenia or some... Surely you don't feel for Romania twister!
Top

With this squad only refs can stop us. Neagu never lost to Gyor on home field, queen is back!

I forgot about Oftedal but Duda is not that important anymore, only in defence. Amorim could leave ETO if she keeps decreasing.
Top vlad_impaler wrote:With this squad only refs can stop us. Neagu never lost to Gyor on home field, queen is back!

I forgot about Oftedal but Duda is not that important anymore, only in defence. Amorim could leave ETO if she keeps decreasing.

Tomori was unexpectedly good. Pity she can't contain herself. The gesture against Helle was disgraceful, to say the least.
Last edited by eduardsson on Fri Jan 26, 2018 9:22 pm, edited 1 time in total.
Top

The game was kind of the ego battle for CSM, they handle it well

guess this is more accurate than ehf stats


As you see each team has "MVP" trio ahead but on "second line up" CSM's players had one goal-plus for each of them....and there that make difference .

This season and the next one will also question a lot the quality of Ambros Martin! And future Euro...
Top

On Liga Nationala as we concern match score evolution (CSM-GYOR)was the same as in Zalau- CSM ; Valcea-CSM ; Craiova -CSM all these teams capable to face CSM on first 35-40 min on equal terms but then fall down mainly because they have the lot shorter....well the intensity of CSM's play were not quite the same but still not far away....
From my point of view CSM will be less cramped in Gyor's match like it was in Bucharest ....Gyor must work hardly to win second leg.
Top

Should Győr win the second leg? I think no.

Champaigns can be opened up in May, so as I see, there's no need to overestimate the significance of main round matches.

I remember the year, when Győr suffered against Metz in QF, lost Hungarian cup even in March/April and then won CL title. Or a year before, when CSM was 4th in main round and after the Rostov game, every f4 team wanted to get them in the draw, than they won the title.

So at this phase, these are just good battles.

I mean, at this phase ETO is not in top form, and it's also questionable, whether they are the best Hungarian team today. However, important games are in April May and now, we're in the end of January.
Top

Gros 1 goal at Vardar, buy her instead of Kurtovic! Sajka is a much better potential as a RB.
Top

The best hungarian team today: FTC. The league table is the fact.

So at this phase, these are just good battles.
I agree with you(Bajkalb)....and one of the reason is this :
"All the girls have done their job, so when you have good players in the team, the girls in the defense have done a titanic job, the ones on the bench have encouraged us, it is very important to feel like a team. I can say that since we came to Bucharest, it's the first time we really felt we were teamed, "(Neagu said)

Users browsing this forum: No registered users and 11 guests