Players of generation born in 2002-2003 and younger are involved. 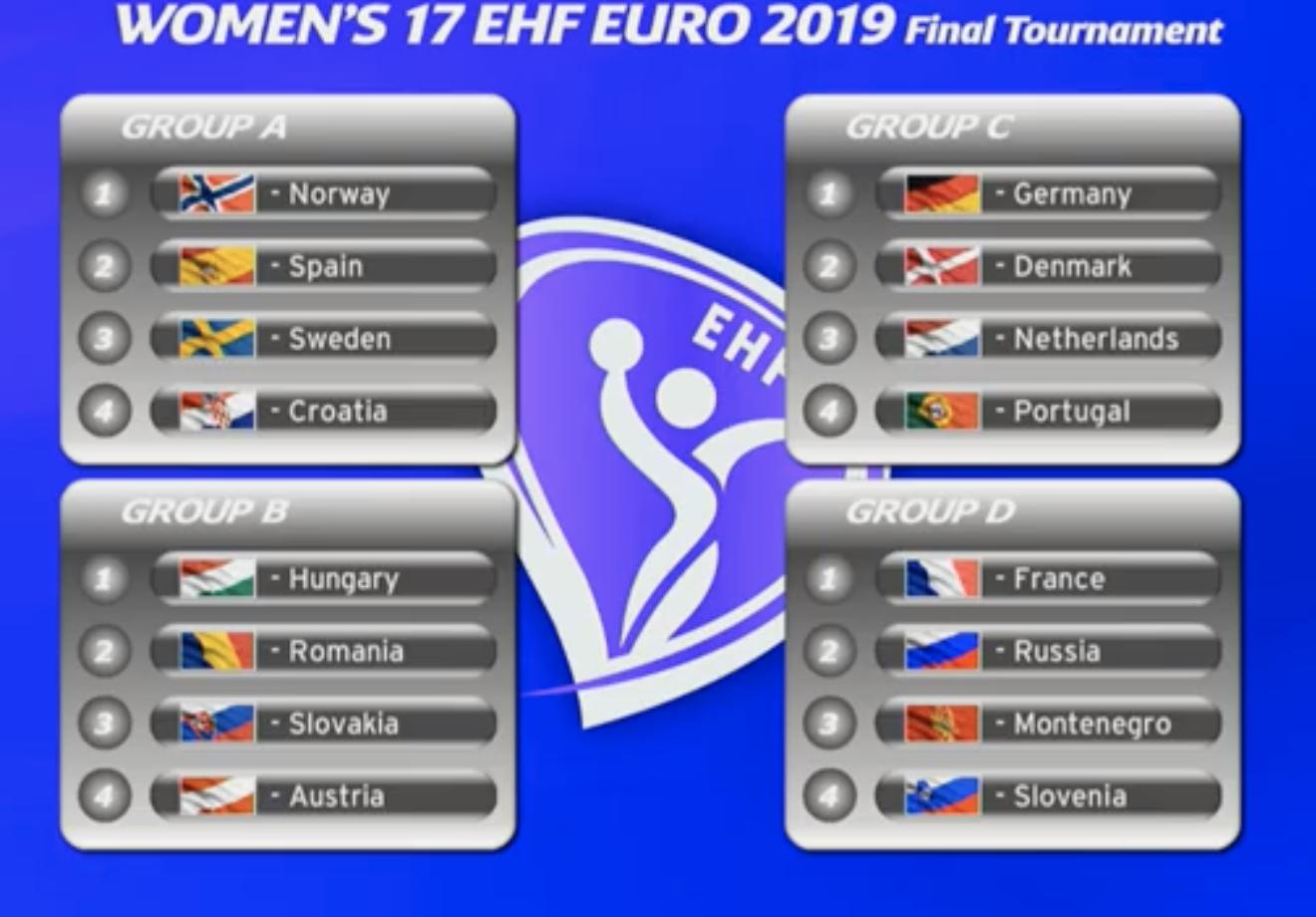 The Danish team has been selected for the championship:

I really, really like this team. I don't have to many complaints. Clara Skøtt is on the team and she should carry a big load of the offense. It will be interesting to see where Heine decides to use her because she can play all positions and is very good at it.

Maria Jensen from GOG not being on the team is bizarre. The best attacking threat we have on the right back and she scored 10+ goals in several matches this year. Alberte Ebler, Anna Nørgaard and Frida Møller are good but not quite the same level as Maria in attack. Personally I wanted four HEI/VRI players on the team because I think a player like Julie Kragh deserved as well but she is not even in the preliminary squad, so she is for sure not going to play in the championship. Mathilde Troelsen from Mejdal/Halgård I would have love to see at a championship as well. Caroline Thisgaard from Team Esbjerg as well.

Players from Denmark to keep an eye on: Maria Berger Wierzba (playmaker) who has dominated her own age group here in Denmark by being smart, having great explosiveness and being a good finisher; Clara Skøtt (right wing, right back) as mentioned she has dominated this age group as a left handed player so she has a ton of hype behind her. I'm looking forward to watching her play against the best because here in Denmark she scores one crazy goal after the other; Anne Sofie Ottosen Møller (left back) has a fantastic shot and the thing that stands out about her is that she is clever with her shot selection. Something many players lack in this age group.

The position with the most to prove is the two goalkeepers. Both Andrea Gormsen and Emilie Firgaard are good goalkeepers in good teams but which of these two can stand out on the next level? I rate them very closely so it will be interesting to see if one of the two can separate herself.

The player that could surprise people: Alberte Ebler at the right back. She has been a very consistent performer for Skanderborg and could give the team the stability it needs on the position. Again an interesting position with her, Anna Nørgaard and Frida Møller.
Top

A preparation tournament with

Why not Denmark as well? It would have been a short distance to Lübeck.

Here is the Russian squad coming to Hungary for a preparation tournament:

The u19s are basically over, so we can start looking ahead for the u17s in two weeks time. I don't really have a good grasp on the pecking order at this moment in the generation. U17s are often a crapshoot. The Danish team has 3 wins in the last 7 matches and getting hammered against Romania - although that was with a B-ish team. The Hungary u17-NT that runs other countries over they tied against, so we the hell knows. Will be interesting to see

The Danish team thankfully have Heine Eriksen in charge of this generation and not gonna lie, it's my favorite Danish generation in ages. A ton of Aarhus talents on the team and those who are not have just been tearing it up in Denmark. It's just wonderful watching Clara Skøtt. Rarely do you see a young wing with her kind of technique - at least here in Denmark. A problem has been getting her involved on the NT but that has to be a priority for Heine. I'm always very confident in the generations with Heine in charge. Not to take a dig at Tuborg but Heine is tactically much better and it's up to the players to execute which is difficult in the younger age categories. Takes time.

A main issue right now seems to be who the central defending pair is going to be. My guess would be that Ottosen is penciled in for one of the spots and they are looking for her partner with the main contestants being Camilla Vinding and Nanna Løvig. Both great defenders.
Top

So the Danish players ended up winning the practice tournament in Poland.

But it's difficult not being overwhelmed by the sadness of the star of the team, Clara Skøtt, going down injured (looked like the ACL). Her chance to showcase her high level and having a great pre-season ahead of her as well - being just ripped away from her. It really sucks. She's a fantastic player to watch. Scoring effortlessly. Certainly hope she will bounce back stronger.

Heine only selected Skøtt as the primary wing. Her cover was one of the three right backs in the squad, so he will probably have to call in a new wing - I would expect Sara Brixtofte from GOG to be called up.

There were some question marks that hasn't really been resolved yet. The pivot and the goalkeeper. My favorites right now are Camilla Vinding as the pivot and Emilie Firgaard as the GK. I hope the backcourt-starters will be Hamann-Ottosen-Nørgaard but I know Heine Eriksen loves Clara Esseman-Beck who's also a good player.

Will be interesting to watch the Danish players against Hungary next week.
Top

And what about the preparation games this weekend

In conclusion, I declare that EHF must be destroyed
Top

And what about the preparation games this weekend

They seemed to have a drive and a goal to run over another team, and unfortunately Denmark was in the way - twice. They are simply a level above Denmark. That #18 Koronczai was impossible for the Danish defense to control and seemed like she scored half of the Hungarian goals. Kurthi also a fantastic player!

Wierzba was a joy to watch against the Hungarians. She's been compared to Pontoppidan given her playing style and the Hungarians had a hard time not tackling her neck/face during 1v1s because they couldn't stop her body feints. I really hope she keeps up that level and Heine gives her sufficient time to prove herself in Celje.
Top

Romanian squad for Slovenia U17 :

Here is the Russian squad:

You forgot the pivots:

The team from the Netherlands anounced with quite some changes after EYOF. Boeters, Daleman, van Echtelt, Jansma, Mens and Verbraeken will join the team. https://www.handbal.nl/blog/2019/07/31/ ... -slovenie/
Top

Despite that some team managers talking about Top9 teams advancing to the 2020 Youth U18 Worlds in China from this tournament, it should be, in fact, Top11 going through. In addition, the team on 12th place should have a real future chance to qualify if Oceania will not be sending a team to U18 WCh (as usually happen).

Some surprising results today. Austria has now quite good chances to reach the main round - and Romania not to. In group C Portugal beats Denmark, that group is now open.
It's pretty possible that POR and AUT will get to the main round while ROU and DEN won't.
In conclusion, I declare that EHF must be destroyed
Top

For the Netherlands there will be a change in the team. Kim Molenaar (in my eyes one of the bigger talents in the team) is injured . She broke a finger in the first half of the game against Germany and will not be able to play at this tournament. She will be replaced by Vlug
Top

Despite that some team managers talking about Top9 teams advancing to the 2020 Youth U18 Worlds in China from this tournament, it should be, in fact, Top11 going through. In addition, the team on 12th place should have a real future chance to qualify if Oceania will not be sending a team to U18 WCh (as usually happen).

In the end, the winner teams of the two 2019 U17s ECh 2nd Divisions (starting today in GEO and ITA) qualify for the Youth U18 WChs next year.

EHF regulations regarding these youngest U17 competitions is a total joke.

I didn't see her on Hungary-RO 39-32 ...is she injured or coaches decided to rest her for the remaining 4 matches ?
Top

Denmark reached the semifinals having won one single game (that against Germany).
In conclusion, I declare that EHF must be destroyed
Top

Germanicus wrote:Denmark reached the semifinals having won one single game (that against Germany).

Users browsing this forum: No registered users and 6 guests